2 Likes | 719 Downloads | 2K Views
Polyhedral basis: Icosahedron • Frequency: 4v • Tessellation: Class-I • Comparable to the design suggested in the book, "SHELTER," by Lloyd Kahn, 1973 • This particular SketchUp model was generated from scratch, rather than using the data from SHELTER, since neither, outer-extents (dimensions,) nor cartesian/spherical coordinates of the superellipsoid vertices, were provided • (Only the chord factors were published) • The "superellipse" and "superellipsoid" (aka, "superegg") were popularized by the Danish designer, Piet Hein, in the 1960's #buckminster #bucky #fuller #Geodesic #icosahedron 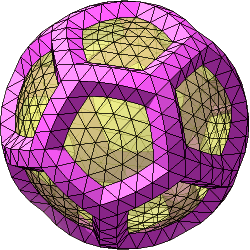