0 Likes | 75 Downloads | 261 Views
Description
These are 3D skyscraper and building example models concept designed and built in a few minutes with SKyscraperFX for SketchUp software. No SketchUp 3D concept model in this series of examples took more than 10 minutes to complete with SKyscraperFX, unless otherwise noted in the future.  SKyscraperFX is a fast concept 2D to 3D FX generator for concept design for gaming design, urban design and 3D enthusiasts using SketchUp. SKyscraperFX generates fast basic level 3D designs which can be refined later. The purpose is to be able to quickly conceptualize base 3D designs from various 2D patterns.  Because SKyscraperFX has a multitude of 3D and 2D design FX, plus various techniques and ways to combine FX to vary design forms upon any user created SketchUp, AutoCAD or library included 2D geometry, it can create many more design variations than those in the multiple skyscraper packs. These are mostly concept level designs which would be suitable for further 3D refinements later, or for this level of concept or 3D graphical design. Tutorials and Videos at YouTube SKyscraperFX4SketchUp channel. #city_design #concept_design #gaming_design #highrise #sketchup_architecture #sketchup_buildings #sketchup_cities #sketchup_extensions #sketchup_skyscrapers #sketchup_software #skyscraper_design #skyscrapers #urban_design #urban_planning
Architecture 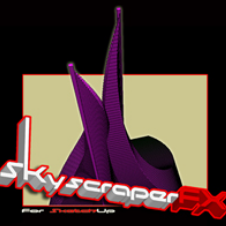